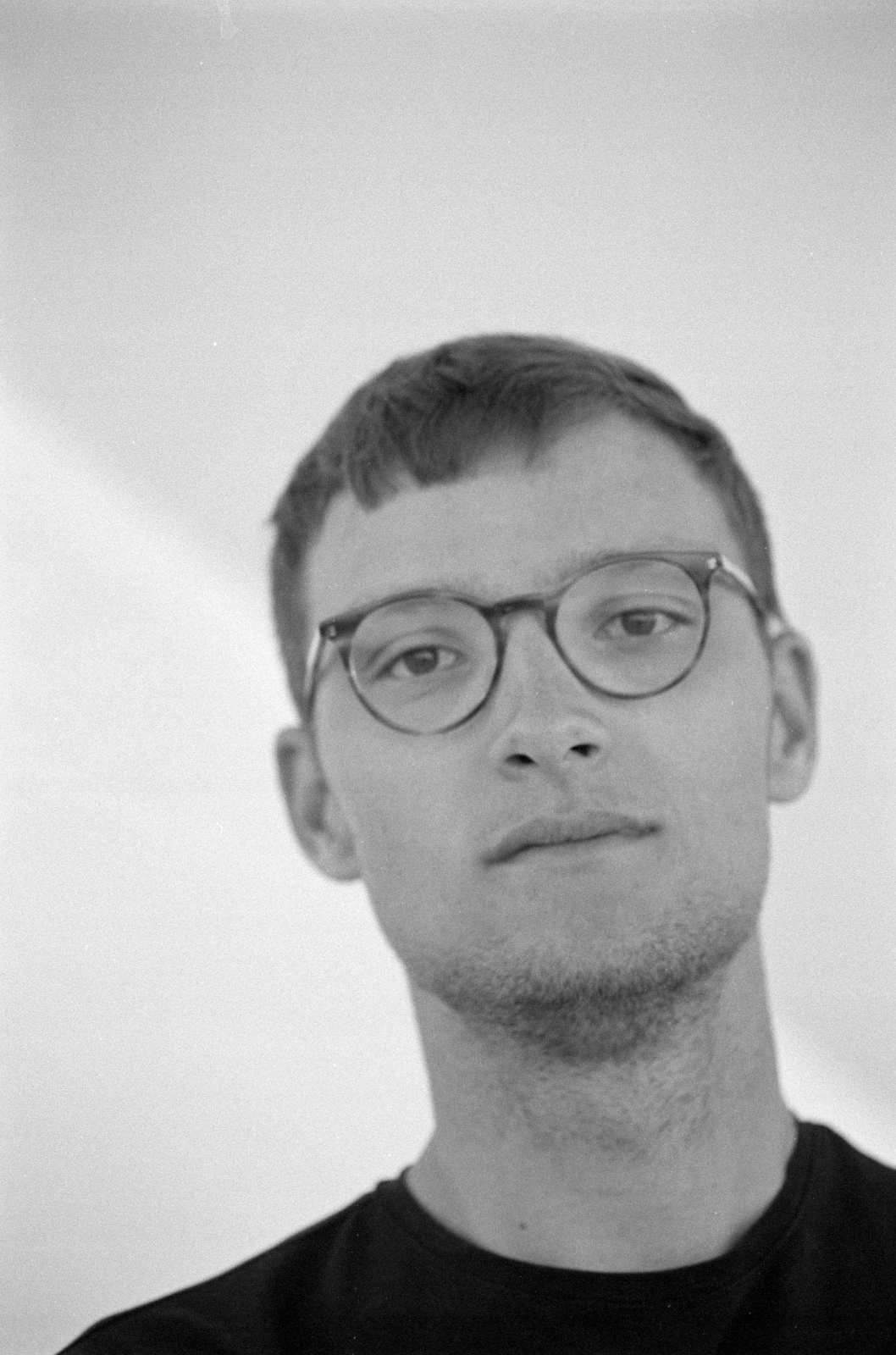 In the tradition of Bauhaus this thesis project tackles social and economic problems present in Dessau and give answers on how an innovative and livable city will look like in the future.

With a modern attitude, the project enhances different cores in the city of Dessau and showcase how a robust core in the city center can reintroduce production and innovation into the urban fabric, by connecting living, working and leisure. In the fragmented urban structure of Dessau, a clearly defined city center is not present. The project revitalises the city center by turning the problem of shrinking into a potential to discuss density without architecture by putting emphasis on re-programming public space. Thereby the center core is understood as an archipelago of different programmatic identities linked by a chain of redefined public spaces and parks, which are not only co-existing with the surrounding landscape but bringing nature into the urban fabric.

The project is avoiding a nostalgic use of Bauhaus, but gain from the “indestructible idea” of a modern and innovative way of living, by understanding modernity as an attitude which has challenged our way of living in the past and can challenge it once again today.

The Modern Dream
View from Balcony 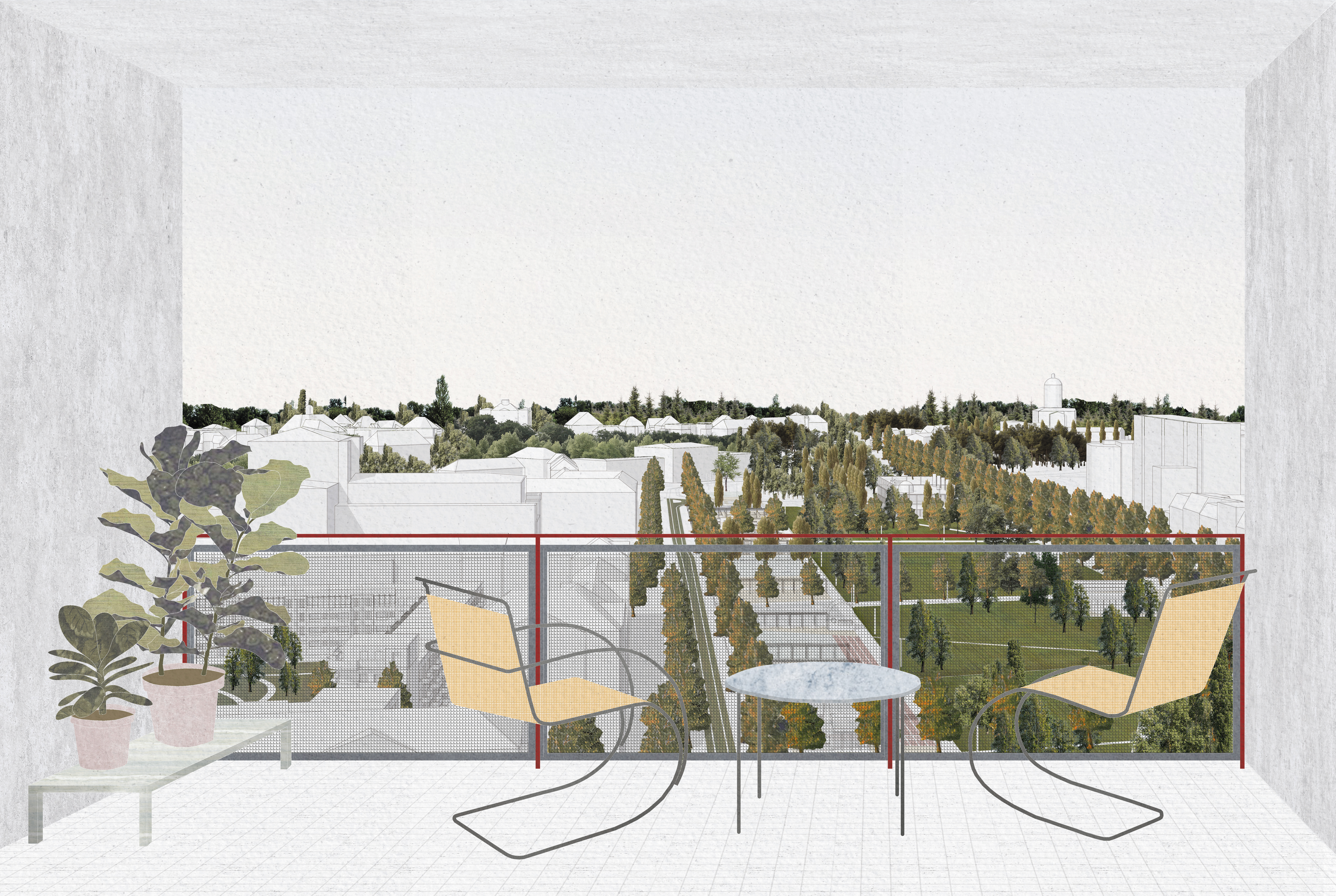 No. I – Modern Attitude

This year Bauhaus is having it’s 100 year anniversary, which opens up a discussion about which historical testimonies remain and are present in the Bauhaus today and also, how architects and designers can use these testimonies for challenging the modern way of living once again. The attempted development of a new everyday culture led the Bauhaus Dessau to become a laboratory of modernism. The modern attitude at Bauhaus was shaped by a combination of the demands of design with the demands of society. In Gropius words “Architecture should be a mirror of life and time.”

My ambition relies on the use of Bauhaus ideas without limiting Dessau to being only the ‘Bauhaus City’. Modernity should therefore not stand for a time in architectural history, it should stand for a specific mindset, a mindset which is challenging the existing conditions to enhance the future. Modernity needs to be understood as a spirit in order to use the historical traces of Bauhaus in Dessau in an active way. In this way the project seeks to avoid a nostalgic use of Bauhaus and gain from the ‘indestructable idea’ (Mies van der Rohe) of a modern and innovative way of living.

The identity of Dessau and it’s urban structure can be seen as a patchwork of time and archipelagos of different programmatic cores which resulted in a mosaic of typologies. Those typologies are clashing at multiple spots in the urban fabric and create a divers structure of the city. The patchworks of different layers of history might variate in typologies and structure, however they have one thing in commune, they where always adapting to social and economic condition in unconventional ways. From the first time Dessau was documented as a city in 1213 over the period of Bauhaus to the re-building after the second world war until today, Dessau’s identity was never about looking back with a nostalgic view but to question the tomorrow.

Based on the extensive reading of the current condition, the main goal for this project is, to turn the problem of shrinkage into a potential to integrate biodiversity into the urban fabric. By relating to existing qualities, the project strengthens a landscape carpet, running from the river Elbe in the north to the river Mulde in the south. By connecting the already existing qualities in the surrounding landscape, the project starts a revitalisation process and purposes a new way of programming public space in the city centre of Dessau.

The project is not anymore seeing the elements of urban cores and landscape edges as contrasting but rather as related to each other. By that, the project strengthens the public life in Dessau and contextualises the fragmented urban structure. Thereby the centre core is understood as an archipelago of different programmatic identities linked by a chain of redefined public spaces and parks, which are not only co-existing with the surrounding landscape but bringing nature into the urban fabric. 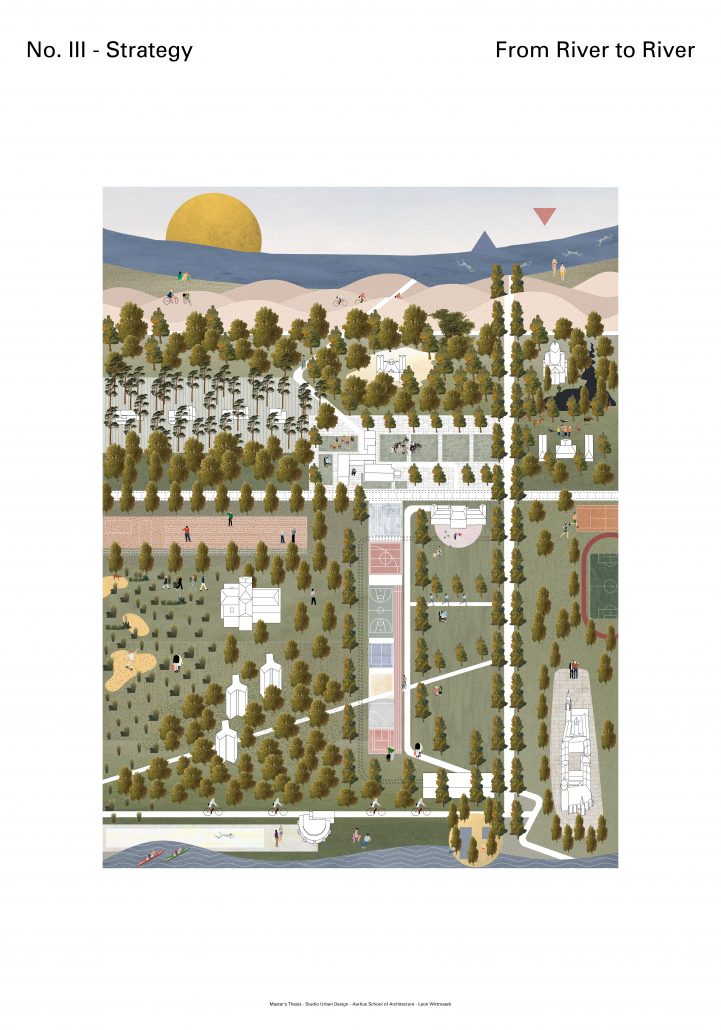 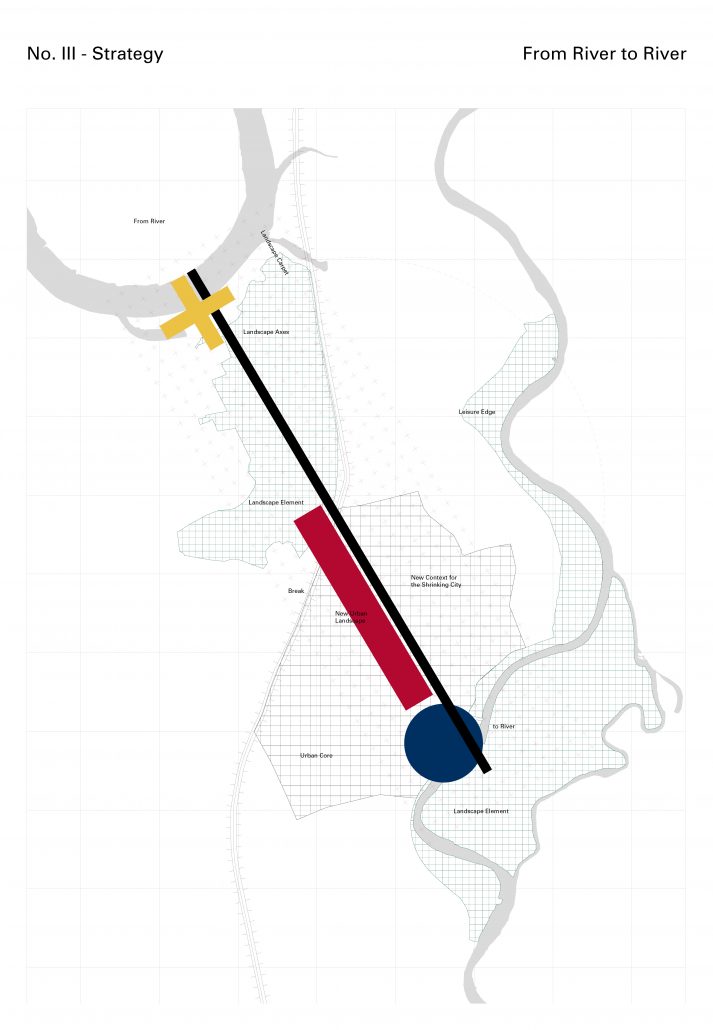 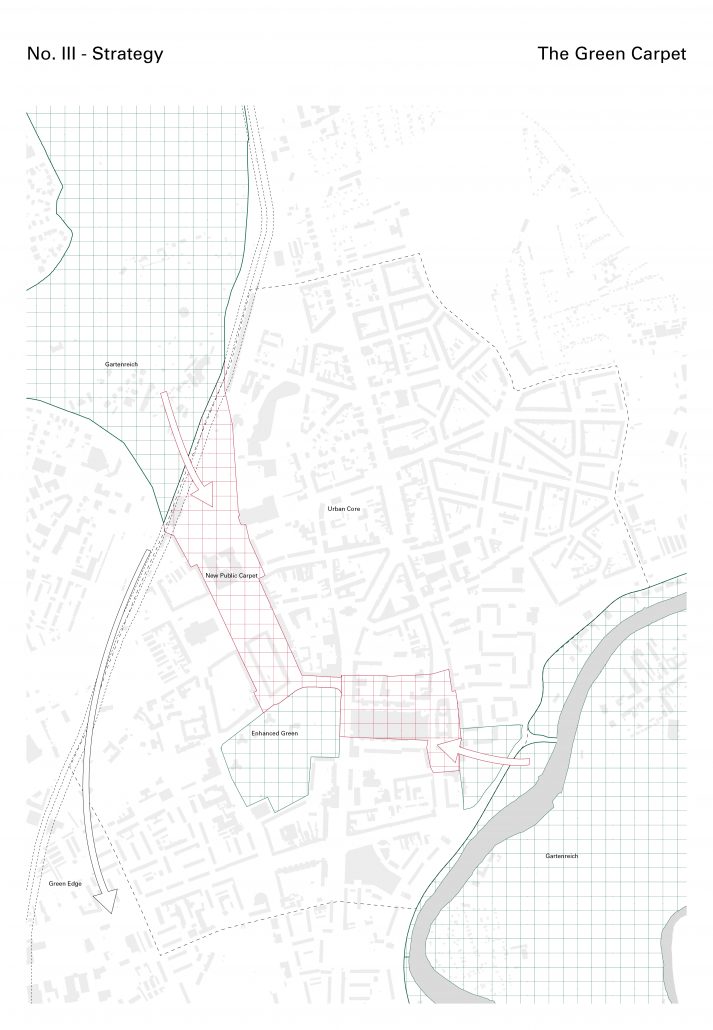 By proposing a masterplan that is both embedded in the fragmented urban structure and adding something new, the projects transforms the problem of the shrinking city into an opportunity. The ambition compose in addressing the landscape carpet – both revitalisation strategy and context for the fragments of time. 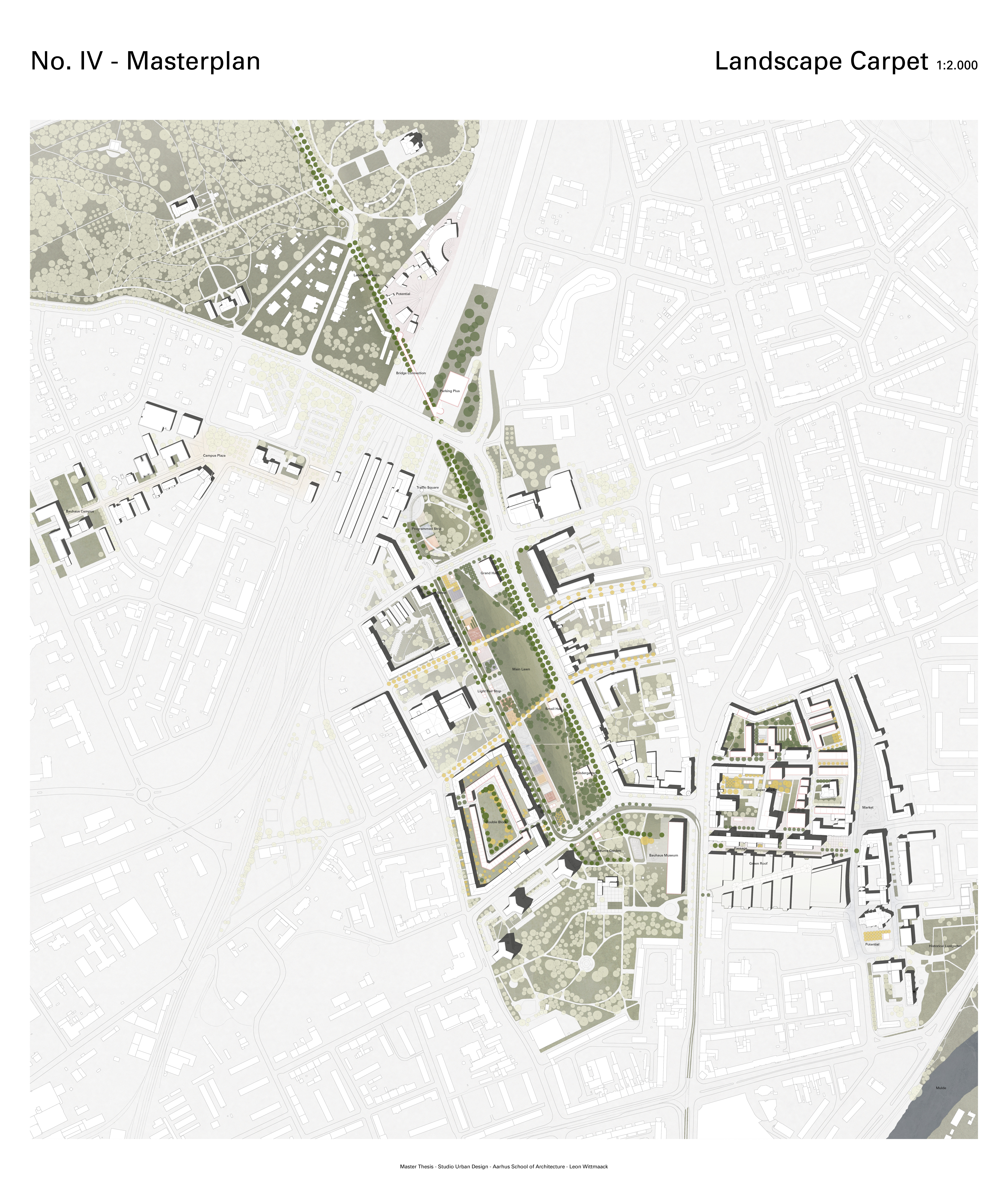 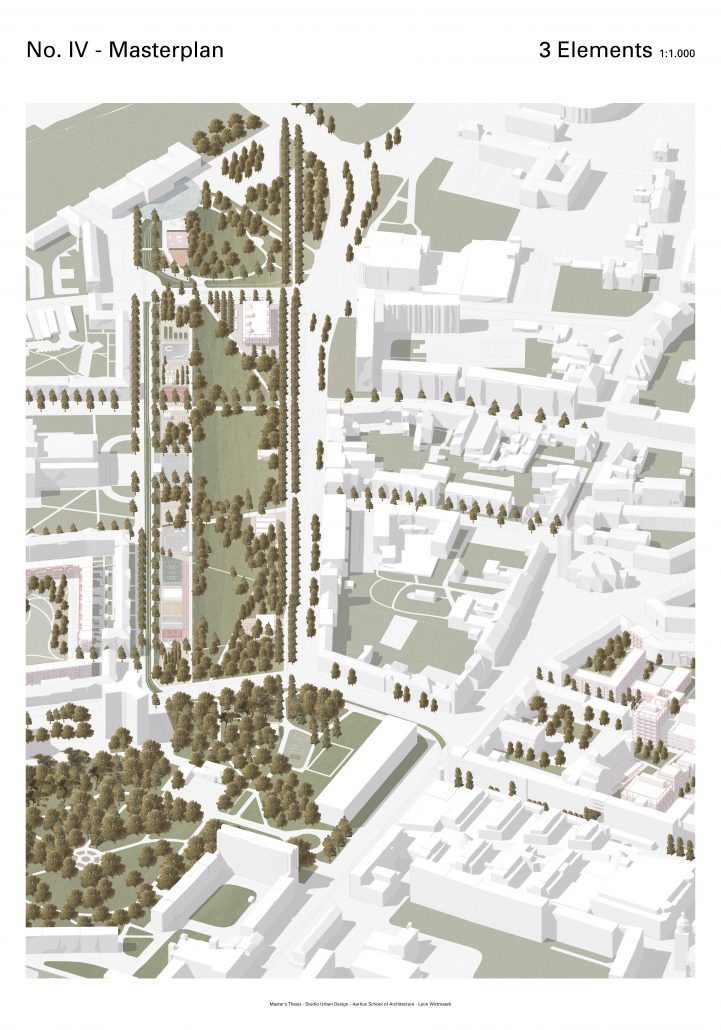 The Masterplan consists of three main elements, which together start the revitalisation process of the city centre. It is both the reprogramming of the public space and the densification of strategic important places that enhances the city centre. Those elements are not seen as independent units, they are highly connected to the surrounding urban structure; simultaneously adding something new and enhancing existing qualities. The three main elements are: a newly introduced Park (green corridor), a Double Block and a Super Block, which together boost public life through a close connection between different programmatic identities.

The green corridor is the binding element of the masterplan. Continuing the story of the greater landscape, the corridor introduces a diverse patchwork of public spaces to the city centre. Through the placement of diverse programmed places, a sequence of attractions strengthens the main flow from station to the centre.In contrast to the green corridor, the urban cores are densifying the city centre. Based on the reading of the city, those urban cores are examples of how densification of the fragmented urban structure could look like. The two examples are not understood as an impairment of the historical urban fabric. Moreover, they are referring to historical traces but adding something new. As a result of that, they are true to the identity of Dessau, as a city of modernity. 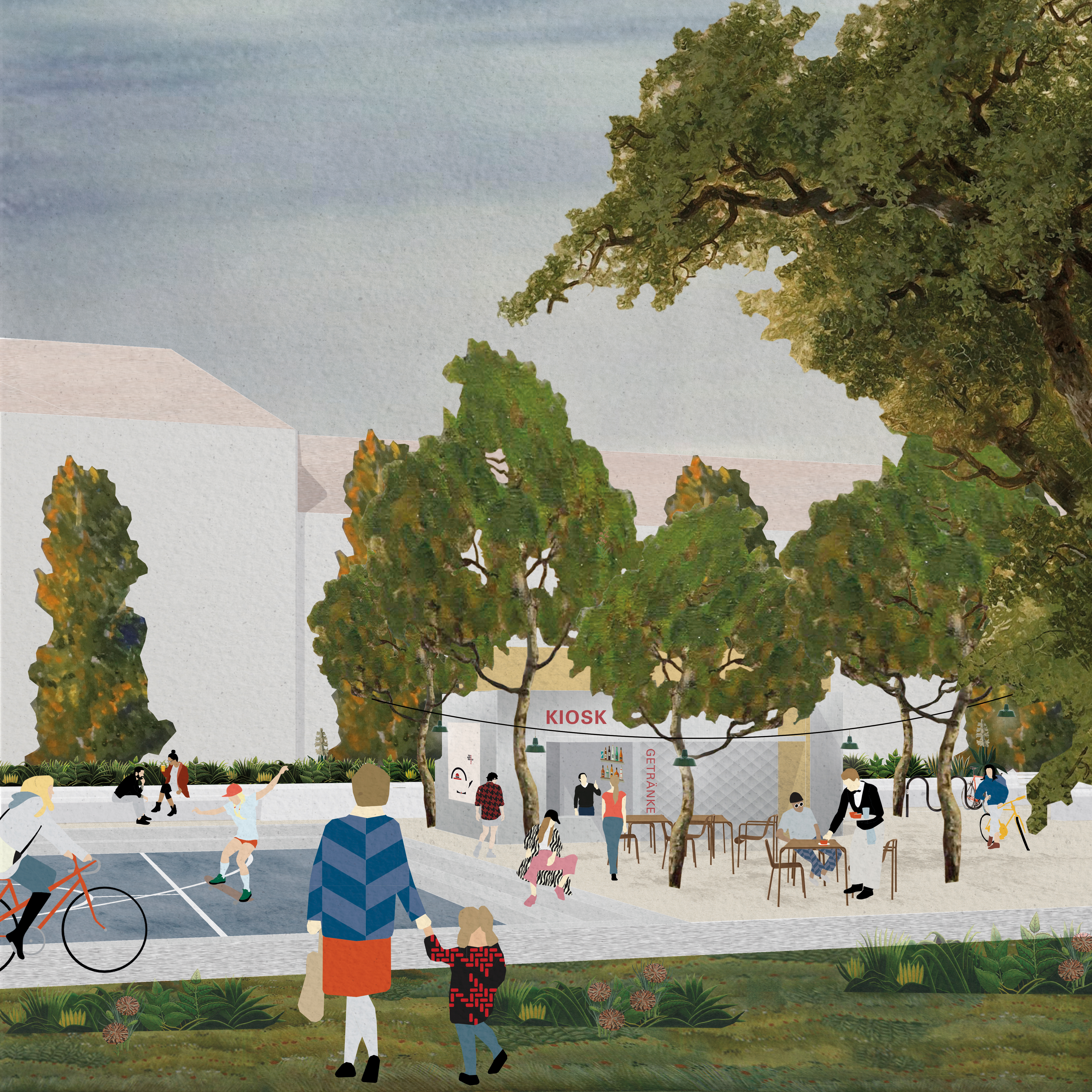 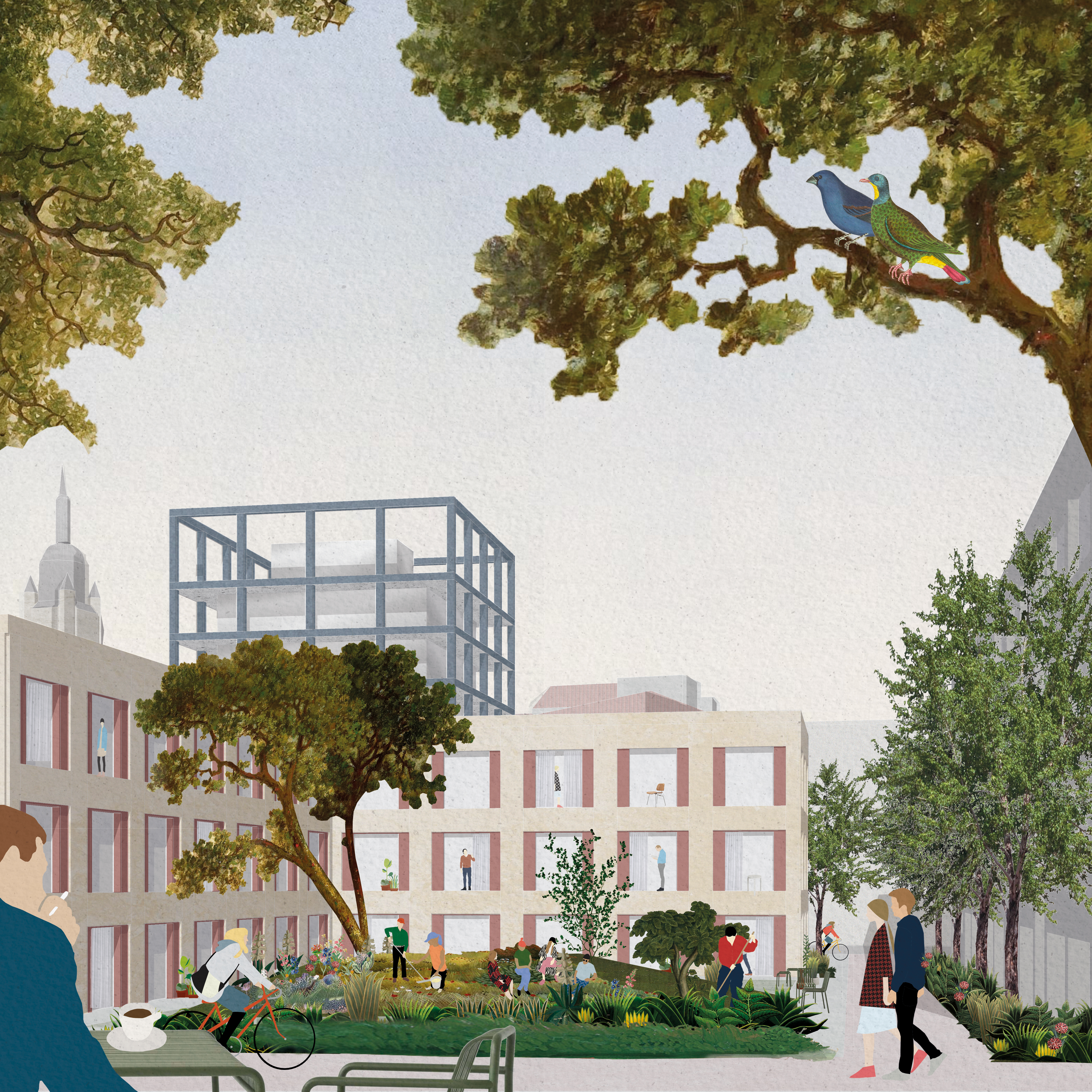 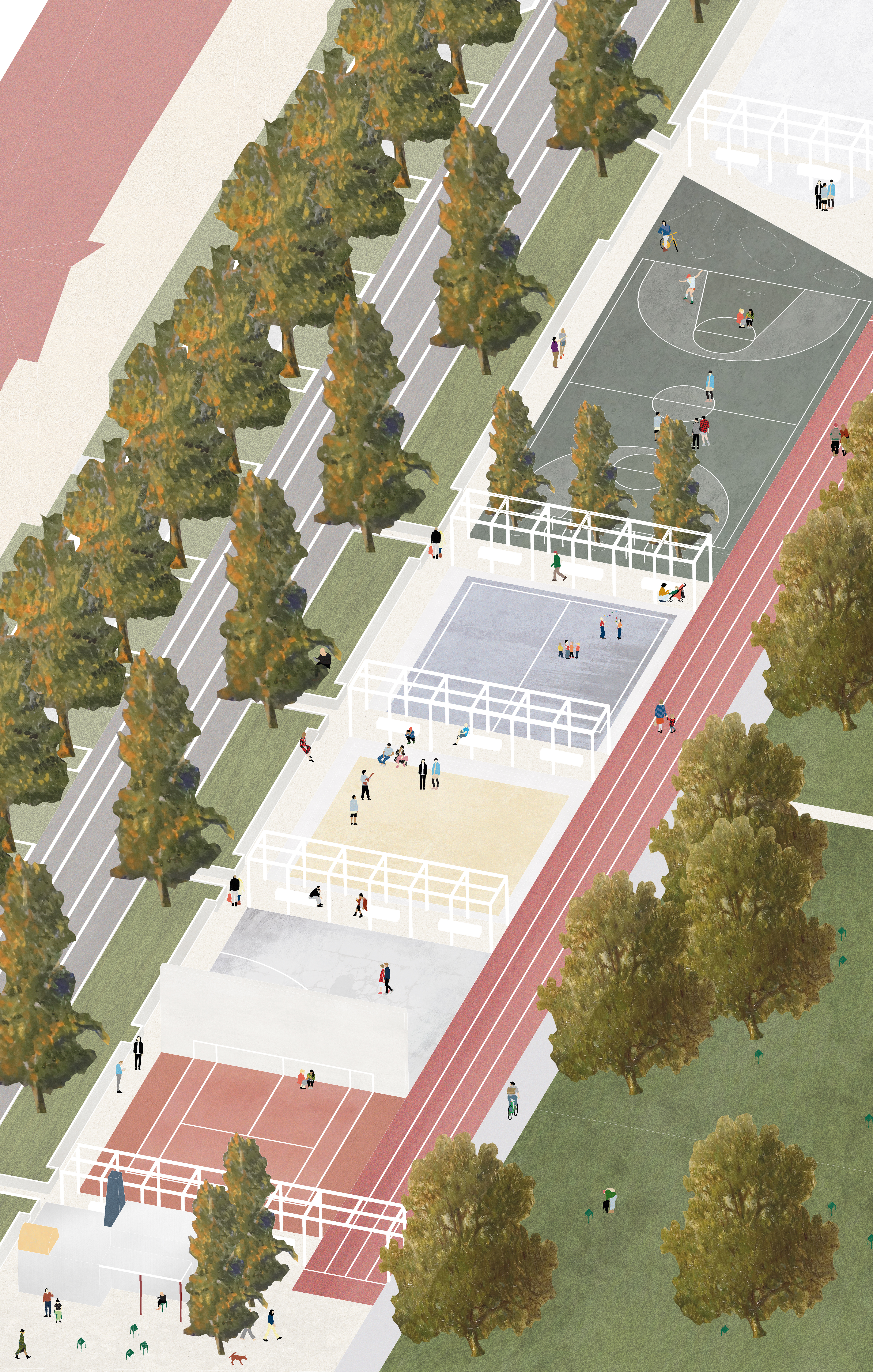 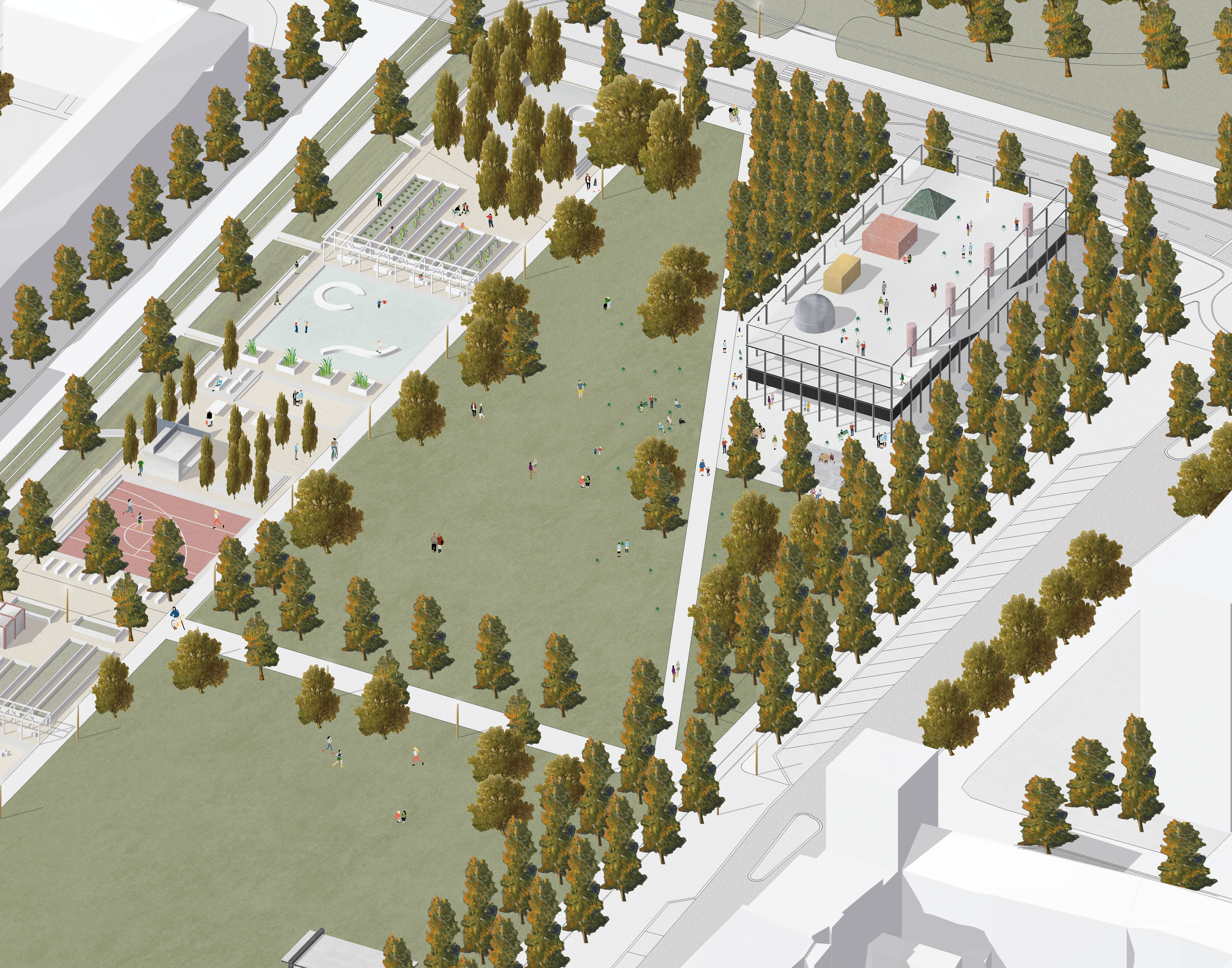 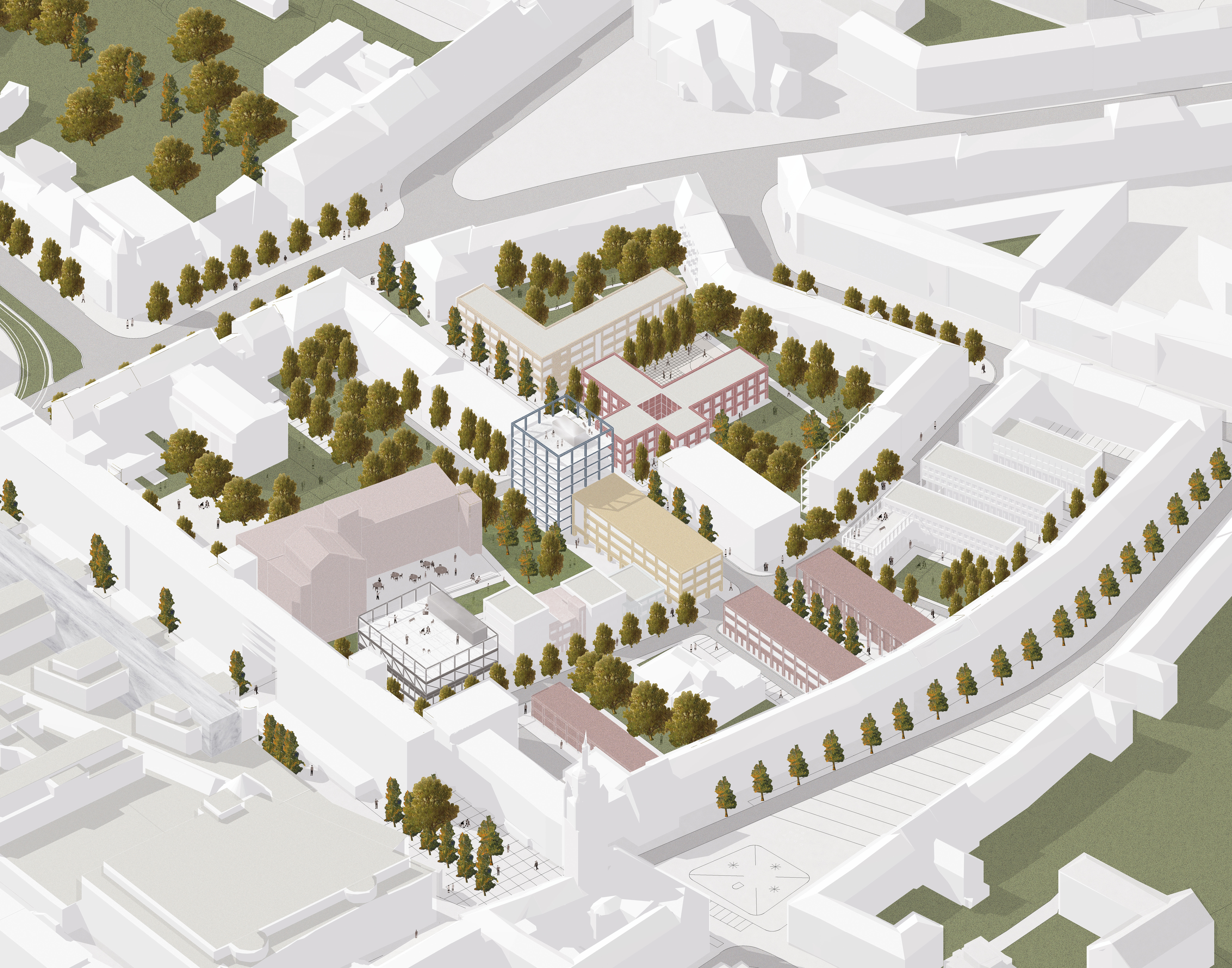