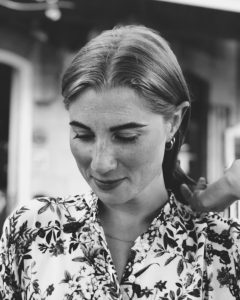 Expert consensous has concluded that even brief detention can cause psychological trauma and induce long-term mental health risks for children. (Linton and others, 2017)

Architecture of Displacement explores the process of border crossing as an unaccompanied minor refugee entering the United States. The thesis project consists of drawing a reception centre that in example eliminates the negative associatons with- and experiences of todays processing

centers. The aim has been to use architecture as a tool to lessen the trauma inflicted by displacement.

Here, scenes of flimsy boats filled with individuals, or a countrys border marked by fences and guns should not be regarded as challenges to surpass or ignore, but as opportunities to reassess how and why we respond to the circulation of people today(Anderson, 2017). 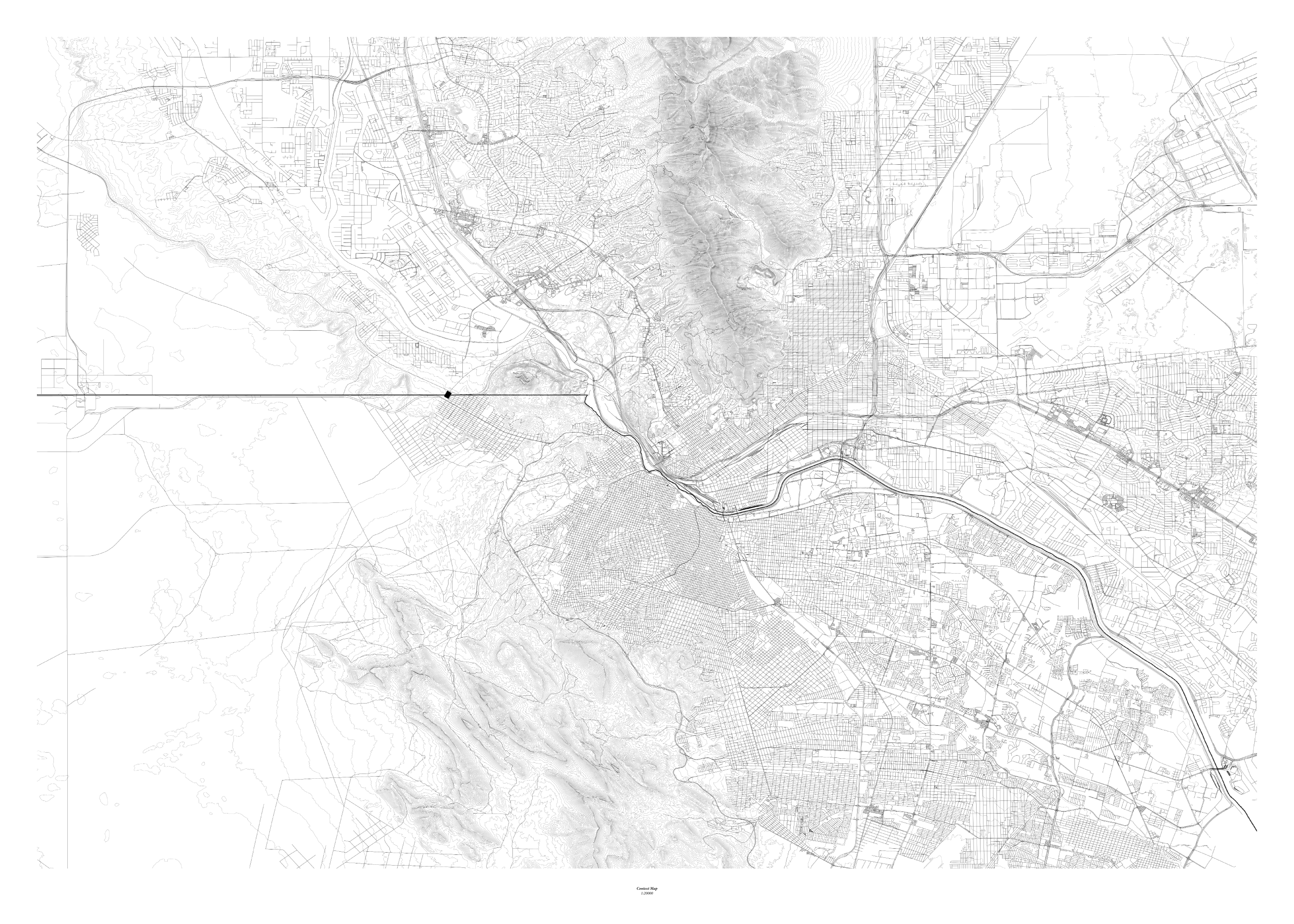 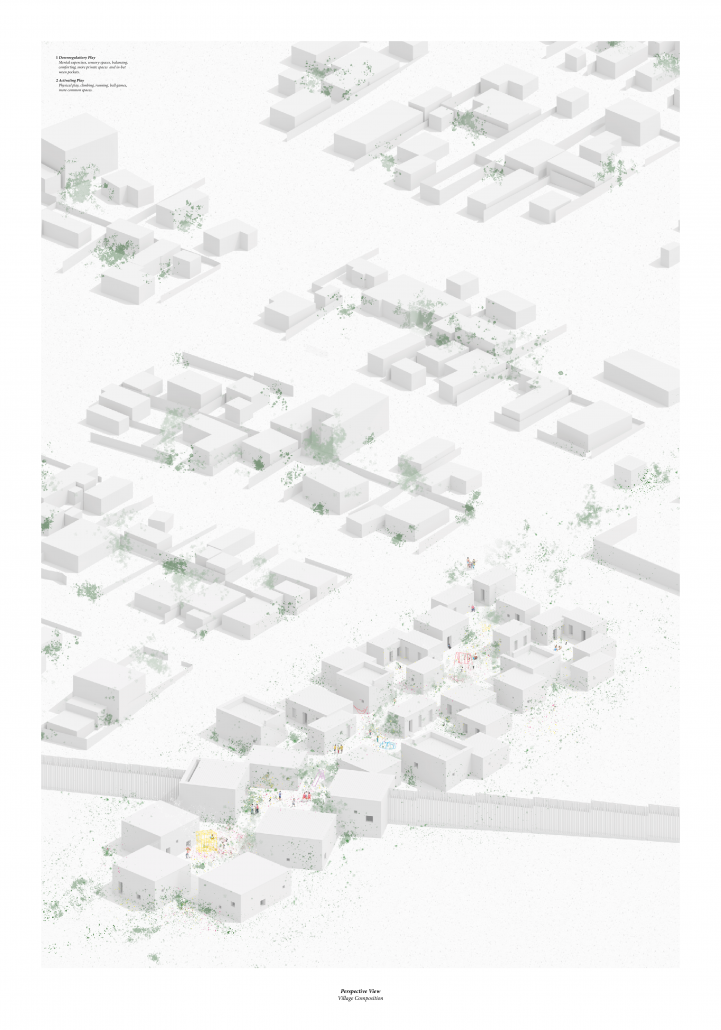 IN BETWEEN ANAPRA AND SUNLAND PARK

On the outskirts of El Paso, U.S.A, and Juárez, Mexico, you will find Sunland Park and Anapra – a meeting point connecting nature and city, separated by the linear border wall.

The Anapra neighborhood that reaches for the border follows the landscape terrain and is generally comprised of low-rise and very small family units, sheds, small commercial buildings, sandy roads, reused materials and an immense collection of in-between spaces. The chaos is limited by the fairly structured road system that connects the favela to the desert highways in one end and the city center of Juarez in the other, making it a popular and natural point of crossing for refugees.

Opposite to the Mexican architectural context leaning against the fence, the neighborhood of Sunland Park is pulled back from it. Sunland Park is comprised mostly of low-rise family homes, larger commercial centers, paved streets and larger gardens and courtyards. As opposed to the chaos of the Anapra neighborhood, Sunland Park offers a copy-paste style, and planned environment.

The thesis project, which crosses the actual border, does by that exact action, physically connect the two different environments. The thesis investigates the transition of, and the differences in what the unaccompanied minors come from as opposed to what they most likely are going to. In addition, the placement has the intention to function as a part of a series of constructions, that hopefullly, eventually, will dissolve or topple the wall itsself.

The need for reception centers for unaccompanied minors varies in great numbers. This variation lays ground for creating a flexible project that is able to transform and adjust to different cultures and traditions, to grow and shrink according to the needs of the time. An important source of inspiration has been the flexible and sustainable spaces evident in traditional American Indian Pueblos(villages) found close to El Paso and Juárez. The villages were often arranged in clusters around common spaces (NMMA, 2010).

The buildings in Architecture of Displacement are therefore arranged around a common central spine that expands and retracts in order to respond to the unaccompanied minors’ need to experience spaces step by step, making the spaces both forseeable and transformative. Traditional architecture of the area has inspired the spatial compositions of both interior and exterior spaces that encourage play and the feeling of safety.

Play not only provides opportunities for fostering children’s curiosity, self-regulation skills, language development, and imagination but also promotes the dyadic reciporal interactions between children and parents, which is a crucial element of healthy relationships…Play can serve as an antidote to toxic stress response to return to baseline. (Yogman and others, 2018) 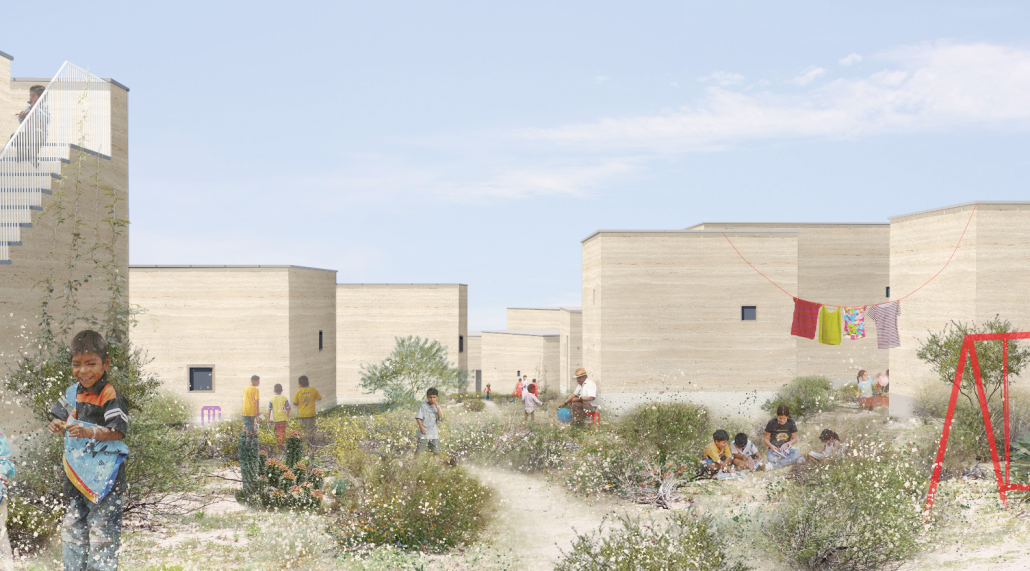 Earth bricks, adobe, is the most used traditional material in the El Paso / Juárez area, and is, in addition, also a predominant element of the architecture of the minors´countries of origin, El Salvador, Guatemala and Honduras (Semik, 2013). Architecture of Displacement therefore explores the use of rammed earth as an elongation of the traditional adobe and as a recognizable, safe end material for the children.

Thick walls, small openings, look-outs and niches respond to the minors needs to retract from overwhelming situations, and at the same time respect the desert sun and dusty winds.